Copland’s homage to everyman opens this concert with a blaze of brass.

Our young soloist, Edward Walton, will perform max Bruch’s first violin concerto, today one of the most popular of all concertos for the violin.

Like another famous 5th symphony, Tchaikovsky’s is all about fate. Featuring some of his most memorable themes, it has a gloriously romantic slow movement and a thrilling climax. 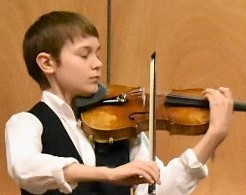 Edward began the violin at the age of 3 and currently studies with Dr Robin Wilson at the Australian National Academy of Music in Melbourne. Already an experienced performer, Edward has appeared as a soloist with orchestras across the globe including performances of the Khachaturian Violin Concerto with the Western Bohemian Symphony Orchestra in the Czech Republic, Mendelssohn Violin Concerto with the Bendigo Symphony Orchestra and was a soloist in Vivaldi’s Concerto for 4 violins with the Whitehorse Orchestra in Melbourne.

Edward has recently returned from the 9th International Young Musicians Competition in Legnago Italy, where he was awarded the Premio Magnani Young prize, the Premio Virtuosite prize and was the joint winner of the Premio Salieri Young prize. Since 2016 he has been invited regularly to attend Professor Zakhar Bron’s masterclasses in Interlaken and has also performed in masterclasses with Professor Maurizio Sciarretta.

Before commencing studies at the Australian National Academy of Music, he was the recipient of the Victor Cromack and Melba Alma Harris Cromack Memorial Scholarship in the pre-college program at the Sydney Conservatorium of Music. Edward is a keen chamber musician and has participated in the Sound Thinking Chamber Strings program and has been selected for the 2017 and 2018 Australian Chamber Orchestra Academy.

(Unfortunately our previously advertised soloist has unavoidably had to withdraw from this concert. We are thrilled that Edward Walton has been able to step in at the last minute.)