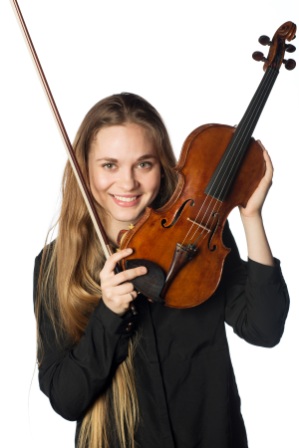 Zoe commenced her violin studies at the age of four under the direction of her mother, Helena Freisberg. She completed her Bachelor of Music at the Queensland Conservatorium with Michele Walsh, where she was awarded the Matilda Jane Aplin Prize and the Varda Jefferies Prize. During her studies in Queensland, Zoe played concertos with the Redlands Symphony Orchestra, the Corda Spiritus Orchestra and the Brisbane Philharmonic Orchestra.

In 2014, Zoe commenced her first year of study at the Australian National Academy of Music (ANAM) under the tutelage of Robin Wilson. Zoe was successful in joining the Australian Chamber Orchestra 2 on four tours as an ACO 2014 Emerging Artist under the mentorship of Principal Violin Helena Rathbone. Zoe was also one of six finalists in the ABC’s Young Performers Awards as well as a finalist in the ANAM Concerto Competition. Zoe is also very honoured to be the recipient of the Australian Youth Orchestras Richard Pollet Memorial Award.

This program will also be performed at the Cowes Cultural Centre, 91 Thompson Avenue, Cowes, on Sunday 29th May 2016 at 2:30pm. Tickets available at the door.